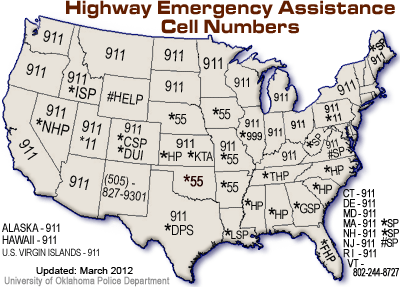 Summer is a big time for family travelling. Whether you’re visiting family, camping, or taking a needed vacation, you’re bound to end up crossing state lines. While most everyone knows “911” is the universal number in the United States to reach emergency services, not many people know some states have other numbers to call for more than just dire emergencies. It’s important to not only know what proper Emergency Phone etiquette is, but also make sure you know all your local numbers.

In 1957, the National Association of Fire Chiefs suggested there be a single number for all emergency calls to be routed through to help streamline emergency calls that came in. Initially, the phone number was ‘999’, the same as Winnipeg. However, the number was eventually changed to ‘911’ because it was easy to remember and quick to dial. 35 days after AT&T announced the creation of this number, the first emergency call was made February 16, 1968. Some areas now allow E-911. Enhanced-911 allows the dispatcher to immediately locate the caller based on where the caller in in relation to the nearest cell phone towers.

Tips For Calling in an Emergency

Thanks to the University of Oklahoma Police Department, they put together a list, state by state, of all the highway emergency numbers. This is perfect for those crossing state lines. You can view their list here.